I saw it first, by the way.

And there are a lot of great movies that weren’t great in their immediate time, something like Logan Lucky. (I’ve anchored my trailer on the Logan Lucky lot and am waiting for you fools to arrive). You can even even discover great films that were great in their time a decade later and they can then be yours. You can watch Michael Clayton three times over a 72 hour span and your roommate may be confused/worried and want to watch Ozark, but you know everything is alright, in fact, it’s great.

Lady Bird is different, because it’s double great. And I saw it first. I saw Lady Bird on October 22nd, at Brattle Theatre for their IFFBoston Fall Focus festival. I knew Greta Gerwig had the stuff weeks before you. While you were caught up fashioning your Reputation takes, I was ankle deep in the Gerwig-inspired DMB (uhh, Dave Matthews Band) resurgence. Before November’s think pieces were even filed, I’ve already though at least 33% of those thoughts, like “man I should really call my mom.” And before the final credits strolled and you thought, “man, I should really call my mom,” I had already started to respond to mom’s texts with a little more pep.

And I’m not done quote yet. Lady Bird isn’t only a great-great film. It’s a great anti-backlash film. Remember Baby Driver? There’s a part of our collective hive cultural brain (way guilty) that holds us back from liking anything too much. Something is good, then it’s great, and then it’s overrated. And then it sucks, then it’s alright, and then it’s underrated. Maybe I should be on Twitter less.

Back to Lady Bird. We’re more like Kyle (Timothee Chalamet) than Danny (Lucas Hedges). Too many of us have thought, “I don’t like money, so I’ve tried to live by barter alone.” Too many of us took one poly sci class and now declare in a sigh to anyone who’ll listen, “hegemony!” because wokeness is a burden and a curse. We all just really wanna be Saoirse Ronan, though. 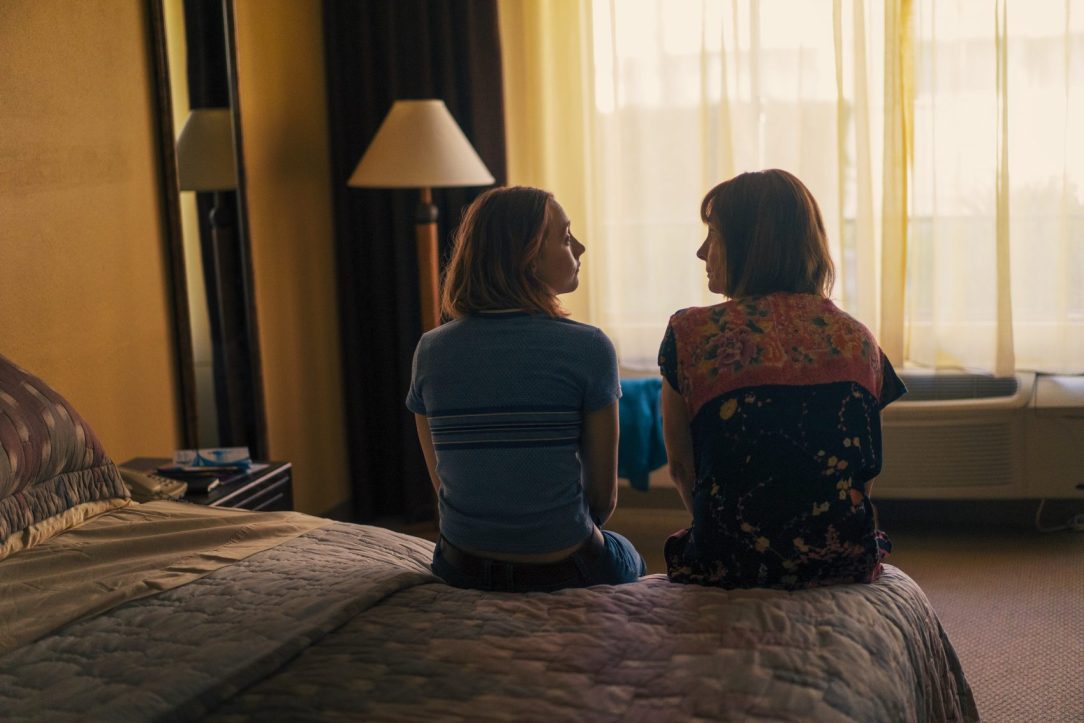 Lady Bird is a film about, among many other things, letting go of your pretensions. Gerwig could’ve called it Call Me By MY Name, and it would have worked. We might have gotten another Oscars mixup too. In her senior year, one of the lessons Christine McPhearson/Lady Bird learns is to like the things she likes–“Crash into Me” being the hinge that opens well of feeling.

Oh, you liked Master of None? Ever seen some real Fellini

Oh, you hated Mother!? Don’t touch me you uncultured swine.

Columbus is gorgeous and stirring (it is!).

There’s been no such backlash to Lady Bird. It’s–almost universally–a top five film of the year in all the holy scrolls/lists critics spent their Thanksgivings compiling. That’s not just because it’s really good. It’s also because, part of the experience of Lady Bird is that it strips you–the viewer–of a lot of your pretensions. (Not of all them, surely, I still ward off the devil whenever I see a Young Sheldon promo.)

“In tone and structure, after all, this is a teenage comedy. It finds humor in the eternally renewable cycle of senior year: homecoming and prom; math tests and school plays; the agonizing stages of the ‘admissions process.'”

Lady Bird shares some DNA with Wes Anderson’s Rushmore. Both coming-of-age films are heroes (and authors) caught up in the geography and feeling of the place that shaped them. Both play out over a calendar year and are driven by the precocious, yet earnest ambition of Max Fischer and Lady Bird. Then there’s the depiction of general depression of adult existence (Bill Murray and Laurie Metcalf) lurking over their shoulder. These films make a show of stumbling into insights, which is a much more difficult trick than this-is-what-I’ve-learned-here-I’ve-wrapped-it-in-a-bow-for-you narration.

In Lady Bird, we have the pleasure of watching a person become more herself, in a way that feels earned, and that–as much as the football coach taking over the play’s direction and drawing up stage blocking like it’s a desperate hook and ladder play–is a joy.

Lady Bird feels purifying, in some tangible way. I think that’s what it takes–beyond sheer poignancy–that makes a great film feel so great in its time.

Thinking about getting a dog. This is my blog. View all posts by Ryan Dowd

1 comments on “Lady Bird is great”

This site uses Akismet to reduce spam. Learn how your comment data is processed.